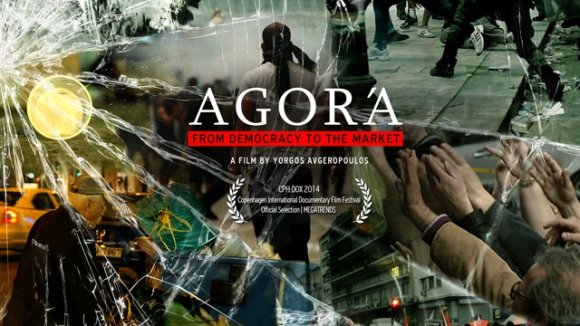 The Greek Film Society Sydney, in collaboration with the Australia-Greece Solidarity Campaign, is presenting the premier screening of the highly anticipated documentary AGORA: FROM DEMOCRACY TO THE MARKET.

The documentary depicts the evolution of the Greek financial crisis from its early stages, revealing its impact on the lives of ordinary people from all walks of life until the present day. It bears witness to the reactions of people on the street and the rise of fascism and solidarity movements, while also seeking answers from the country’s key political leaders, analysts and decision-makers from the international political domain.

After the screening, there will be an exclusive Q&A session with the director of the documentary via Skype from Greece.

Viewers will have the opportunity to ask questions about the movie and hear his unique insights on the political developments in Greece.

A Greek dish ($12) will be available from 6pm (vegetarian or meat). RSVP for food (essential): greekfilmsocietysydney@gmail.com

The film night is a partnership event with the Addison Road Community Centre.