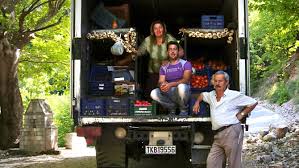 On Thursday 10 December, the Greek Film Society of Sydney screened the following film:

Synopsis:  Nikos, a travelling greengrocer, and his wife Sophia have been driving the same route since the 1980s. Once a week, all year round, they visit the remote villages of the southwestern Pindus Mountains, a 75-kilometre drive. The documentary follows their journey over the four seasons as they bring more than just fruit and vegetables to the elderly folk of the mountains. Best documentary at Greek Documentary Festival Chalkida and Audience Αward at Thessaloniki Documentary Festival.